On August 5, 2020 TPA member Donald “Spec” Campen celebrated his 100th birthday! Spec received his nickname due to the freckles he had when he was a kid. He is a veteran of the U.S. Air Force, having served as a B-17 bombardier in World War II. He is a former member of the Virginia House of Delegates and served the state of Virginia in a wide variety of other roles including Sergeant at Arms. You may see Spec on the silver screen as he also did a little acting. He and his wife Vivian were married for 76 years before her passing in 2018. They have three daughters, and many grandchildren and great-grandchildren. Spec became a member of the Virginia Division on September 11, 1968. He is a former member of the board of directors and has attended countless national conventions. Spec is currently living in his home in Richmond, Virginia. When asked what he thought about celebrating his 100th birthday, he simply said, “I’ve had a very good life.”

About the Scholarship Trust for the Hearing Impaired

Established by TPA in 1975, an independent 501(c)(3) organization, the Scholarship Trust accepts tax deductible donations from TPA members, posts and divisions; nonmembers, businesses, foundations and all other legal entities. To learn more, make a contribution to the Scholarship Trust or to apply for aid, please visit www.tpahq.org/scholarshiptrust.

About Travelers Protective Association of America

Pictured is Donald “Spec” Campen at the 2015 annual convention is Hampton, Virginia. 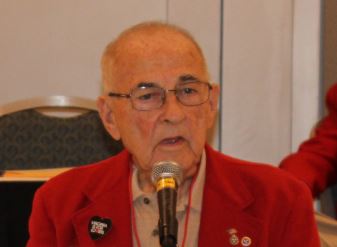 Travelers Protective Association Awards $22,100 in Financial Aid to those with Hearing Loss

Members of the Louisiana Division recently held a state board meeting. Nominations were made for…

Travelers Protective Association Awards $22,100 in Financial Aid to those with Hearing Loss

Virginia Division
JOIN TPA
Become part of a dedicated fraternal benefit association to network, volunteer, and create life-long friendships.
I would like to learn more about tpa